When the Moon comes in between the Earth and the Sun, it blocks the sunlight and prevents it from reaching the earth’s surface. The moon either completely blocks the sun’s rays or allows some rays to pass through it. When the sun is completely covered by the moon such that no sunlight reaches the earth’s surface, it is known as total eclipse. Likewise, when the disc of the sun is only partially covered by the moon so that some of its rays manage to reach the earth’s surface, it is called partial or annular eclipse. Solar eclipse does not form as a result of any mystical reason, but it occurs through the natural movement of the moon.

The size of the sun is very big as compare to the moon. The sun is about 400 times bigger than the moon. But the primary reason why solar eclipse occurs (when both are aligned perfectly in a straight line) is that the earth-sun distance is roughly 400 times greater than the earth-moon distance. In other words, the sun lies at almost 400 times farther apart from the earth than the moon. The farther the object will be, the smaller it appears. It is because of this reason that when the moon lines up perfectly with respect to the sun, it is big enough to block the sunlight.

Solar eclipse is categorized into the following four kinds: 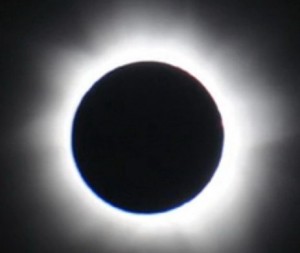 It is formed when the moon covers the entire disc of sun and virtually no sunlight is allowed to pass through it. It means both heavenly bodies are lined up correctly in a straight line. 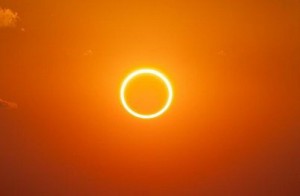 It is formed when the sun and the moon does not align exactly in a straight line. For that reason, the sun is not completely covered by the moon. Since the sun’s surface is not entirely covered, it throws its light on the earth and so it becomes very difficult to witness such kind of eclipses. If the moon envelops the sun’s disc by more than 90 percent, only then the shadowy look of the sunlight is observed.

Solar eclipse occurs only at the time of new moon

During ancient times, solar eclipse was thought to be some kind of forewarning or a bad sign. Therefore, ancient people used to get terrified by it because the sunlight fades away during the day.

Effect of Looking at the Solar Eclipse

The sun emits extremely harmful radiations all the time and so staring directly at the sun (even with the help of binoculars or sun glasses) is very risky because it can injure eyesight and can even lead to blindness on a permanent basis. Likewise, if you gaze directly at the sun during solar eclipse, it will be equally dangerous for the eyes just like seeing it without solar eclipse. Watching the sun in a total solar eclipse (when the moon covers the sun completely behind it) is safe but since it lasts for only few minutes, it’s also not recommended.

Facts About The Sun For Kids | The Brightest Star

Carbon dioxide is a gas at normal temperature and pressure. The chemical formula for carbon dioxide

Neptune, a vivid blue-colored planet, remained undiscovered for many years since it was not accidentally found

Being massive, Jupiter stands as the largest planet in the solar system. It is also the